Providing Provenance on the Blockchain

CannVerify utilizes blockchain technology as an additional optional layer for product authentication. Using NFTs, we bridge the gap between physical products and the digital world. Product authenticity and ownership can be verified through the blockchain.

Once a record has been saved on the blockchain, it cannot be altered or deleted. This prevents any type of tampering of data making the blockchain a reliable source of truth.

Blockchain networks are decentralized meaning there is no single server or entity that controls the data. All participants (or “nodes”) in a blockchain continuously check each other to make sure data is consistent.

NFTs are for more than just art

Since the beginning, we saw the value of NFTs and how it could be used to link real world products to the blockchain. Each active CannVerify serial is registered on the blockchain as an NFT and can be transferred to anyone. The NFT can be used as proof of ownership for a product.

To understand NFTs (or "non-fungible tokens”), you must understand blockchain tokens in general. Tokens are digital assets that live on the blockchain. In the world of blockchain, there are typically two types of digital assets: cryptocurrency and tokens. Cryptocurrency is the native currency of a blockchain, such as Bitcoin or Ethereum, while tokens are new currencies built on top of existing blockchains. If you created your own coin on Ethereum, for example, that would be considered a token, rather than cryptocurrency. Your token would also have it’s own unit of value.

NFTs, however, have no single unit of value. For example, if you register a bicycle as a non-fungible token on the blockchain and also register an iPhone as another NFT, those tokens are not interchangeable with each other since they are individually unique.

A quick primer on how blockchain works

A blockchain is a database that is shared acoss a network of computers. Once a record is added to the chain, it is very difficult to change. The network makes constant checks to ensure all copies of the database are the same.

Records are grouped together into blocks and added to the chain one after another. These are the basic pieces of a blockchain:

Can be any information, a serial number for example

All the blocks linked together

How a serial gets added to the blockchain 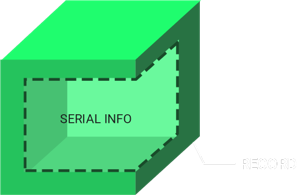 A serial is recorded. The record includes the details such as serial number, timestamp and activation status.

The record is checked by a decentalized network. The computers in the network (called “nodes”) check the details of the record to make sure it is valid. 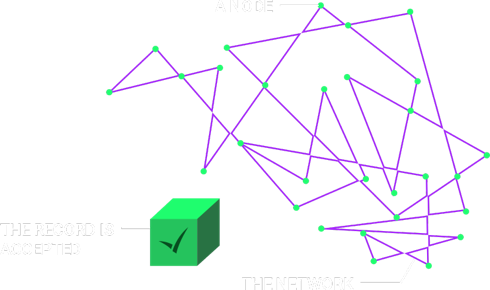 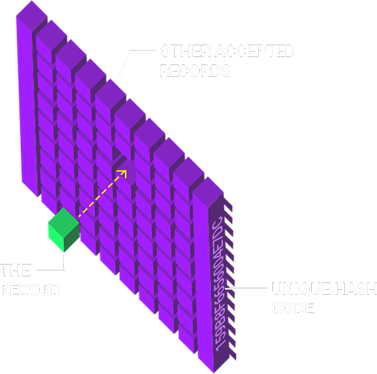 The records that the network accepted are added to a block. Each block contains a unique code called a hash. It also contains the hash of the previous block.

The block is added to the blockchain. The hash codes connect the blocks together in a specific order.

What makes the blockchain tamper proof

A hash code is created by a math function that takes digital information and generates a string of letters and numbers from it.

Any change to the original input will generate a new hash. If someone deleted just one period from the entire Romeo & Juliet text, it would be noticed because the hash would change.

New hash of Romeo & Juliet with a single period removed:

A changed hash breaks the chain

Ready to get started?

Request a demo to see how your brand can get started today.